I signed up to join SA the day after Corbyn lost the election in December 2019. Although his voice and attitude was a refreshing thing to hear in politics, I was never what one might call a ‘Corbynite’. I did not have the same faith as many of my friends on the left, that his winning would automatically, in of itself, bring out a new era of British politics, or that socialism would slowly be brought about by reform. Regardless, it was the tipping point for me. I was gutted, and his loss solidified all the beliefs I held: parliamentary politics won’t save us, only we, the people, can do that.

So, the question, I believe, is not why I joined SA, but why I didn’t join sooner. And to this, I can only attribute laziness and apathy. I had some quite contradictory views. On the one hand, I thought that change could only come about is people like me fight back and try to make a difference. But at the same time, I felt that the systems in place are so sturdy and ingrained that people like me have no chance of forming any worthwhile resistance.

Even today, I still occasionally fall into this way of thinking. But Joining Socialist Alternative and being involved in the fight for change reminds me we are not powerless. Regular interaction with people who feel the same way, reading, discussions, protests and all forms of resistance reinforce this.

The BLM protests which have taken the world by storm, and the consequent readdressing of the way people see police and society, has reminded me how attitudes and ideologies can be changed in what feels like an instant, even if the kindling that would start this fire has always been there. The authorities in Minneapolis agreeing, under pressure, to ‘disband’ their police (we’ll see what this actually looks like in the future) is an unimaginable change in one of the biggest fortresses of capitalism in the world, and yet, with just three short weeks of protests and action, it has happened as a concession to the movement.

I daren’t imagine what an organised, conscious working class could achieve, But I’m certain that even a socialist revolution will pale in significance to the things that humanity, once liberated from the shackles of exploitation, would achieve. I just hope I’m still alive to see it.

“Pay us what you owe us!” Unions must prepare to coordinate industrial action 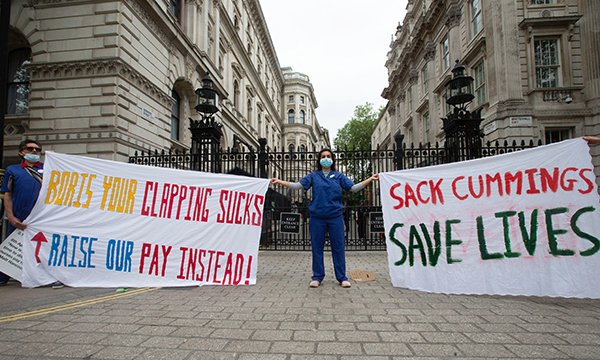 Who really runs society?During the pandemic we’ve seen it’s not the rich, who have hidden away in their mansions, but it’s the delivery drivers, the hospital porters, the bus drivers, the nurses, the shop workers, the junior doctors, the refuse collectors and all the other key workers who have kept people alive and kept things […]

Could Starmer’s Labour be outflanked by the Tories again… this time on social care?

Tens-of-thousands have perished in Britain’s care homes, and rumours are now beginning to circulate that the Tories are putting in place far-reaching measures to “protect” social care, ahead of what could be another very deadly winter. According to a Guardian report published, the government is taking steps toward bringing flailing social care services under the […]